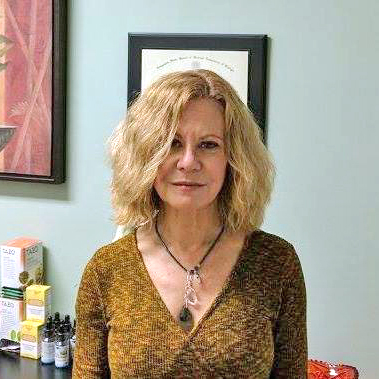 Pamela Bellamy, age 64, of Dahlonega died unexpectedly Saturday, January 4, 2020.
Pam was born in Kennesaw, Georgia, the daughter of Raymond and the late Clarissa (Chris) Bellamy. Pam graduated from the field of acupuncture at the top of her class from Yo San University in San Francisco after completing a four-year Master’s program in Chinese medicine.  Her practice of 20 years changed the life and health for hundreds of people she served.  She created and chaired the 911 celebration in Dahlonega for four years beginning in 2001 to honor local first responders and active duty military and veterans.  Thousands of dollars were raised to help first responders in the community.  Pam was active in the community and was a long-time member of the Dahlonega Lumpkin County Chamber of Commerce, the Dahlonega Network Group and a 2011 graduate of Leadership Lumpkin.
Pam was a gentle soul, yet at the same time could be one of the fiercest.  Defending friends earned her the childhood nickname “Lady Hawk.” Feeling deeply for inequalities and injustices of the world she embraced progressive politics and activism. She listened with an open heart and defended her truths with astonishing conviction. Pam was both a healer and empath and you felt that in her friendship, the calm presence in her work and even in her authentic embrace when she offered a hug. When one had a deep meaningful conversation with her, you would realize in hindsight that you spent most of your time talking about yourself.
Pam is now resting in the loving arms of her mother in heaven.  She is survived by her father, Raymond Bellamy, Florence, S.C., two brothers, Randy Bellamy, Woodstock and Rodney Bellamy, Nashville TN, nieces Ashley Bellamy, Acworth, Chrissy Strickland, Marietta, one nephew Bryan Bellamy, Steamboat Springs CO, her special friend of many years, Cameron Williams of Dahlonega, as well as many friends she has been a light for many years.
Pam’s ashes will be interred next to her mother at Murrell’s Inlet, S.C.  A public memorial service will be held on her birthday, Saturday, January 25 at 1 p.m. at an outdoor location in Dawson County. E-mail or message Penny Sharp at penny4dahlonega@gmail.com for details.
In lieu of flowers we believe it would be Pam’s wish to donate to an animal shelter of your choice and vote for change in the November, 2020 election.