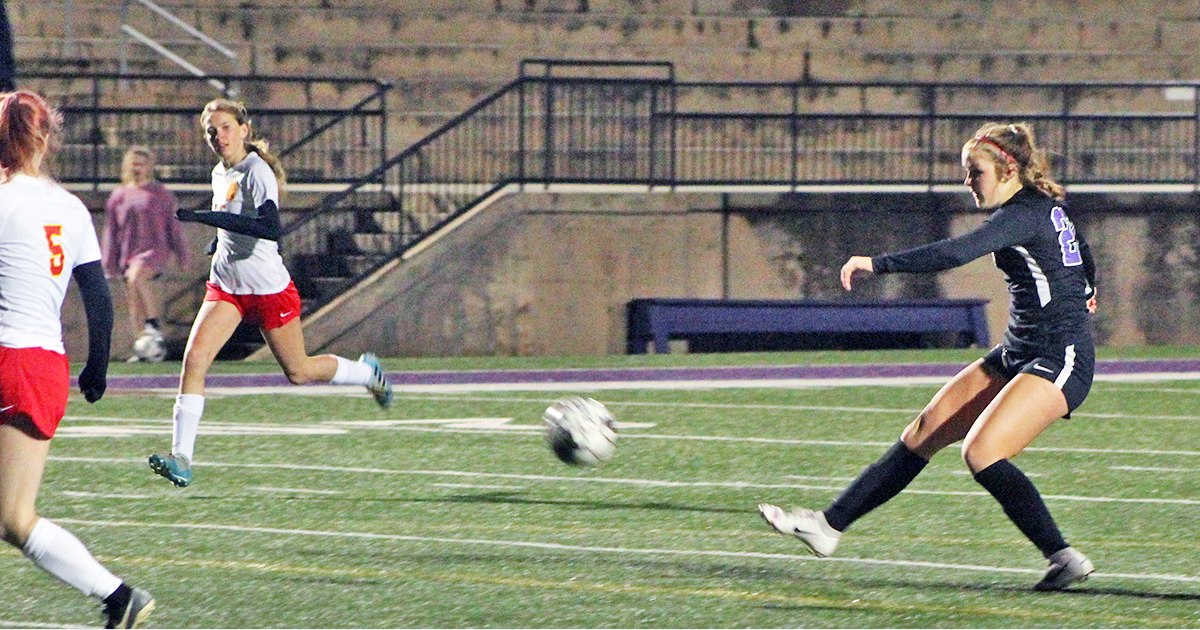 The LCHS varsity girls soccer team looked well prepared for the upcoming 2020 regular season when Lumpkin shutout the Lady Gladiators of Clarke Central 6-0 at the Burial Grounds at Cottrell Field on Friday, Jan. 31.
The Lady Indians took control of the match early with a made penalty kick by star striker Hope Kenney midway through the first half. After being taken down hard inside the box, Kenney delivered a sensational strike past the Clarke Central keeper on the ensuing penalty kick to give Lumpkin a 1-0 advantage.
The Lady Indians upped their lead to 2-0 with less than three minutes left in the first half when Kenney passed a beautifully played cross from winger Rae Lynn Myers to the feet of Limehouse. Limehouse didn’t hesitate and blasted the ball past Clarke Central’s diving keeper to extend Lumpkin’s advantage to 2-0.
Limehouse scored her second goal of the match with 37 seconds remaining in the first half when she got her head to a cross from Olivia Gilleland, extending the Lady Indians’ lead to 3-0.
“It wasn’t expected, but she kept getting herself in the right spot at the right time,” said LCHS head girls soccer coach Don Brock about Limehouse’s strong first half performance.
The Lady Indians never let their foot off the gas as the second half started and quickly extended their lead to 4-0 in the opening minutes of the second half.
Ashley Read scored her first goal of the match after receiving a nicely played ball from Kelly Cronan in the second minute of the second half.
About 20 minutes later, Read struck again. Read rocketed a shot past the Lady Gladiators’ keeper after Kenney delivered a well timed pass to the midfielder to extend Lumpkin’s lead to 5-0.
Lumpkin would strike for one more goal in the match. Limehouse secured a hat trick when she blasted a shot into the back of the net off a rebound from a Kenney strike with just under 15 minutes remaining to make the score 6-0.
The Lady Indians pressed hard for the remainder of the match and saw some strong play from their freshman players, especially Meyers.
“I was really impressed with what some of the freshmen did out on the pitch tonight,” Brock said.
Lumpkin would end up winning the match by a final score of 6-0.
Brock felt the scrimmage proved that his players are ready to match the success the Lady Indians enjoyed last season, if not more.
“To tell the truth, the expectations for this year’s team is to go further into the State Playoffs than we did last season,” Brock said. “We will be using more formations and schemes this season because this is probably one of the smartest teams I have coached and they know what they are doing.”
The Lady Indians will step back on the pitch to open up the 2020 season when they travel to East Jackson this Friday, Feb. 7. Kick off is scheduled for 5:30 p.m.