UNWIND: Finding a happily ever after among the vines

Our local wineries go out of their way to prevent Bridezilla meltdowns.

They start with picture-perfect views of rolling hills crosshatched with vines that lend a spirit of symmetrical harmony to the scene, along with a liberal pouring policy with their homegrown libations.

“I was worried there would be a lot of stress because we had a big wedding party,” says Amber Segers Lewallen, who got married at White County’s Cenita in May. “But everything was just so beautiful, the people were so helpful, that we were able to relax and enjoy ourselves. The wedding venue itself was already so pretty that we didn’t need to go overboard with decorations.”

Lumpkin and White counties now boast seven wineries each with different styles, from the Tuscan opulence of Montaluce to the “rustic chic” aesthetic at Kaya to the welcoming farmhouse air of Frogtown, to Wolf Mountain with its many wood elements and textures. So the wedding industry is booming; lovers are coming from as far away as New York, Chicago, and England to tie the knot in “Napalachia,” but most hail from Atlanta.  “The wineries are crushing it,” says florist Sarah Warner, and she does not mean just the grapes. June is the busy season, but many couples opt for autumn, when the weather is cooler and the leaves are changing and a fire is roaring in a fieldstone fireplace.

“It has taken off exponentially in the past couple of years,” says Jordan DePascale, event manager at Yonah Mountain Vineyards, which has an architectural style characterized as “mountain craftsman,” but looks uncannily like “Falcon Crest.” “We average 40 per year, and we’re hoping to push 50 by 2020.”

Kaley Stephens, the owner of Borrowed and Blue wedding planners, says, “Wineries can be a lot more flexible than churches and other venues, and they really make it a point to connect with their brides. The idea is to get the bride outside as much as possible to take advantage of the views.”

Warner says the greenery of the setting makes her job as a decorator easy.

“Brides don’t need to spend as much on flowers at wineries – unless they choose to,” she says. “The classic, traditional colors are green and gold, and those never go out of style, but this season color is back in a big way. We’re seeing a lot of peach and coral, and those colors really pop with the green of the vineyards in the background.”

Yonah Mountain Vineyards, a 200-acre spread with plenty of space to accommodate multiple events at the same time, holds only one wedding per day so that no one feels crowded or rushed.

“We really prioritize each couple,” DePascale says, “and we want to get to know them intimately and stay in touch with them. People return here on milestones such as birthdays and anniversaries.”

And the bride is not the only center of attention. Yonah Mountain features a cigar lounge and a television room for the groom and his posse. “The girls get plenty of well-lit mirrors, and the boys get the flatscreen to keep them from getting bored,” DePascale says with a laugh. “The guys get a Playstation, Netflix, and Apple TV. We bring them all plates of meat and cheese and drinks throughout the day.”

Yonah Mountain Vineyards, which is geared for bigger, glamour-focused budgets, also boasts Georgia’s only “wine cave,” which can seat 50 for a rehearsal dinner.  Couples have the options of several ceremony spots including one that is smack in the middle of a vineyard; guests traverse through the grapes on golf carts. Looming closely in the background is the rockfaced, namesake landmark.  A 10,000 square-foot ballroom can hold 400 people, and it features a winding staircase for a showstopping entrance, as well as a state-of-the-art sound and lighting system, with a spotlight for that first dance.

“Our ballroom is like a blank canvas that can be easily customized,” DePascale says. “And we have a 500-pound sub-woofer!”

Kaya in nearby Frogtown has recently transformed itself into a total “destination wedding venue” by acquiring the Dahlonega Resort, a lodge sur rounded by eight cabins with a shuttle service. The winery grounds also include a neat row of four, two-story cottages for the bridal party. The cottages have capacious closets to keep the wrinkles from a tux or a train, and a washer and dryer in case, God forbid, some merlot splashes on the taffeta.

“We’re trying to be a one-stop shop for the bride and groom, with an emphasis on convenience and stress reduction,” says event manager Haylee Britt.

Kaya also offers its own catering out of a full restaurant – chef-driven, with locally sourced food – as well as a full spa to pamper the bridesmaids. “All of our ceremony spots are easily walkable and handicap-accessible,” Britt adds.

A patio doubles as a dancefloor, and a reception tent has an Astroturf floor to protect revelers’ shoes from mud. “We try to think of everything,” she says. 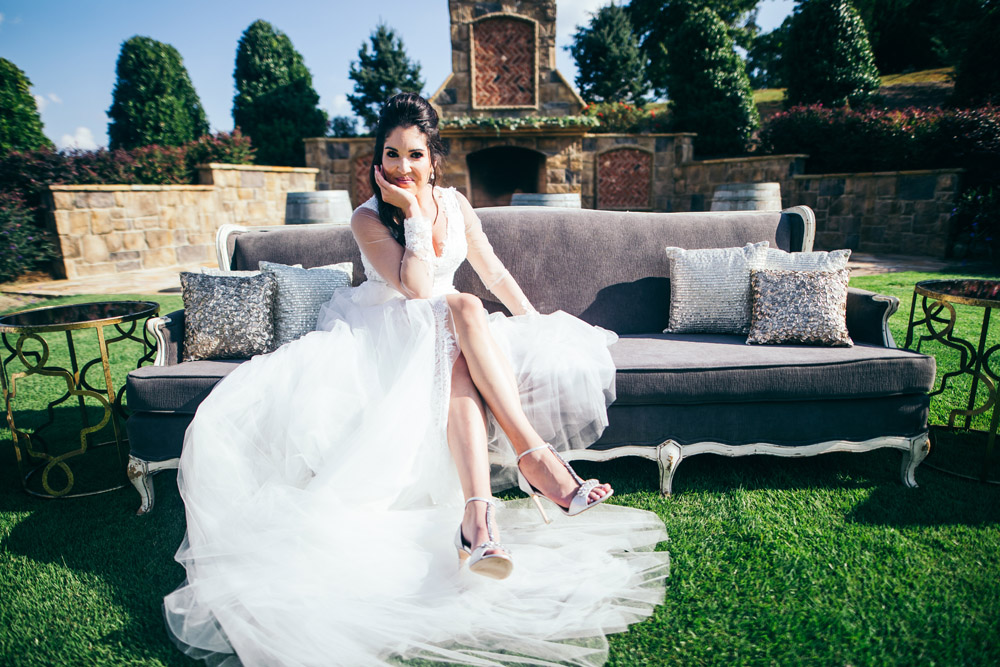 Don’t forget your emotional therapy animal. In one photo from Yonah Mountain Vineyards, you will spot a flower-bedecked Chihuahua mix basking in the festivities.  “I wasn’t sure they would allow it, but I really wanted our dog, Roo, to be part of the ceremony,” says Ashley Parks. “They were fine with it.”

Lastly, one potential pitfall to bear in mind, especially for clergy: “As a drinking officiant, I have to use caution not to get more wasted than the people at the wedding,” says minister Michael Fisher. “At one wedding, which is still talked about at family functions, I may have gotten a little toasted and did a spot-on Rock Lobster on the dance floor. Some of the guests were rather bewildered.”