Ross Crumpton just couldn’t bring himself to sign on the dotted line.

It was 2016 and the White County native was about to start a life in Oklahoma with a longterm career in natural gas power generation.

There was only one problem.

“I absolutely hated it,” he said.

Still, the Georgia Tech grad was making real plans to settle down and buy a new home a thousand miles from his hometown of Cleveland, Ga.

And so he didn’t.

Instead he headed home, with an engineering degree and an idea.

It was a concept that he briefly flirted with in 2013 but couldn’t convince enough people join the business venture.

Half a decade later, he was tired of waiting.

“I eventually said ‘I’m just going to go for it,’” said the 29-year-old. “Though it seemed like putting a production brewery in Cleveland, Georgia was a very far fetched idea.”

Now the idea is anything but far fetched.

In fact, it’s not even far from the Cleveland city limits.

Crumpton’s brewing career began unassumingly. And in the dark.

“We actually started out, me and my roommate, doing muscadine wine fermentation in his closet. It was not very good,” said Crumpton with a grin. “But we tweaked it.”

After he graduated from college, Crumpton made the jump to hops.

“I just decided to buy some home brew equipment and basically just bought enough to get by with literally a kettle on a stove,” he said.

Now the kettles are much bigger. And they’re housed in the gleaming brew room on Helen Highway just north of Cleveland, which opened for business earlier this year.

Located on a spread of green acreage and with Mt. Yonah looming in the distance, the modern wood and metal building stands out against the scenic backdrop.

It also seems to attract plenty of patrons.

On the weekends there’s beer, bands, food-trucks, corn-hole, axe-throwing and plenty of crowds to go along with it.

“Everything just happened so quickly,” he said. “Looking back over the past six months it’s hard to imagine that we’ve come this far. The community support has been awesome.”

“We have tons of families that come and kids playing and things like that”  said Crumpton. “At one point there were literally kids Tarzan-ing from the hop vines,”

Crumpton wants to make it clear that Tarzan-ing from the hop vines is frowned upon at Tantrum. (It even led to a series of ‘Don’t Climb the Vines’ signs.)  But that doesn’t mean he wants the fun to end.

“I don’t want to be a bar,” he said. “It’s not about coming and drinking until you’re too drunk to drive home. People come up here to relax, to chill out and get away from the city.”

So what’s the secret to standing out amongst the crowded market of burgeoning breweries?

“You’ve got to make better beer,” he said. “That’s the whole thing.”

That’s even their slogan.

It can be found on T-shirts and pint glasses throughout the brewery.

And that’s where the expertise of brew gurus Jamie Parker and Megan Norris comes in handy.

“Every beer I brew I definitely look at it as my baby,” said the bearded Parker while standing next to a wall of barrels in the brew room.

He said there’s real work to the job, but there’s also a real pay-off too.

“It’s very tangible,” he said. “When you sit down in the tap room and there’s like 20 people and they’re all drinking beer that you made”

“My favorite part is just going and standing in there and watching people enjoy the beer and hearing how much they love it,” she said. “That what makes it all worth it for me.”

And more and more people are enjoying the work of Crumpton, Parker and Norris these days.

Tantrum produces IPAs like Porch Swing Pale, Folklore and Round Trip; lagers like 90s Baby and Gypsy Queen; sours like Poems @ Midnight and Boom Gose the Dynamite; German/Belgian beers like Michelina and Thrice; and barrel aged beers like Life in the Shadows and the awesomely named Pirate Punk Politician.

Tantrum brews can be found throughout North Georgia and as far away as Augusta.

The plan is to take it even further as Crumpton hopes to bring an in-house canning operation to the Helen Highway property.

He feels he has the right team to make it happen. And he’s quick to give the credit to his staff, and friends and family, who helped to back his brewing enterprise.

“This is absolutely a team effort,” he said. “None of this would have been possible without everyone involved.” 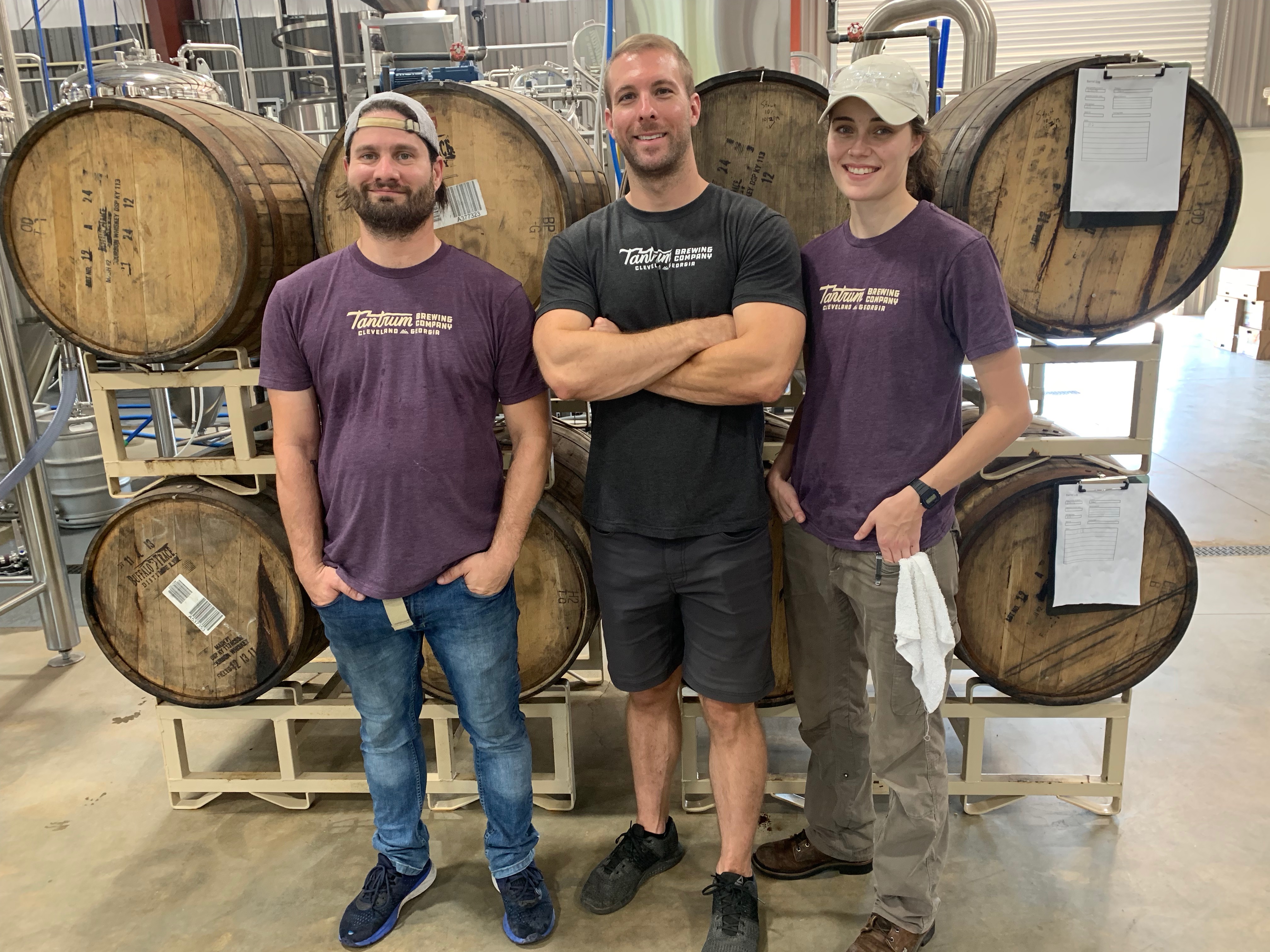 It’s a Friday afternoon and the staff of Tantrum is getting ready to open the doors at the taproom.

Several customers are patiently waiting in the parking lot for 2 p.m. to arrive.

One is waiting not-so-patiently.

Hoping for early entry, a balding biker jostles the front door and peers through the window.

Crumpton walks over and explains that the tap room will be ready in about five minutes.

“Can you bring out a free sample while I wait?” asks the man with a laugh.

That’s just what he wants to hear.

“I want us constantly striving to make better beer,” he said. “And make beer that people truly enjoy. I just want people to come here and try out beer and think ‘Damn, that is really good.’”

Though not a direct quote, a few minutes later the eager biker seems to be thinking just that as he’s settled into the bar with a pint and a smile.

He’s not alone as a crowd begins to fill up the taproom.

It’s still early in the day. The food trucks don’t show up for a few more hours. And the band won’t be there until dark.

But business is already bustling at the brewery.

The founder of Tantrum Brewing Company notices and hurries to over to the tap to help out with the pouring.

This he can do.

Because this is a long way from the natural gas plant.

And Ross Crumpton will drink to that.